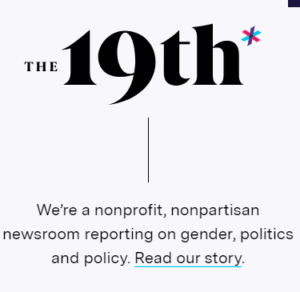 Welcome to The 19th, a nonprofit, nonpartisan newsroom reporting at the intersection of gender, politics and policy. We aim to empower women — particularly those underserved by and underrepresented in American media — with the information, community and tools they need to be equal participants in our democracy

Today, women make up more than half of the American electorate and are more engaged than ever in our politics — marching on state capitols, voting at higher rates than men, and running for local office and seeking the presidency in record numbers. Yet they remain underrepresented in government and in the nation’s executive ranks. Women and gender diverse people are also underrepresented in politics and policy journalism and in newsroom leadership, which influences what stories are told, how the news is covered and whose voices are elevated.

In short: The 19th Amendment remains unfinished business, a fact we acknowledge in our logo with an asterisk — a visible reminder of those who have been omitted from our democracy. The expansion of the franchise continues today, and The 19th aims to capture this ongoing American story.

Our goal is to empower those we serve — particularly women, people of color, and those historically underserved by American media — with the information, resources and community they need to be equal participants in our democracy.