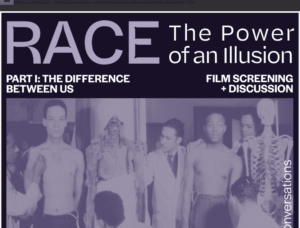 Race—The Power of an Illusion is an award-winning three-part docuseries that provides a comprehensive and nuanced view of the history and uses of race throughout time. More relevant now than ever, the first event in this series, The Difference Between Us (Part I), will consist of a one-hour film screening followed by a one-hour panel discussion and will attempt to answer one foundational question: is race biological or social?

Part I seeks to reveal the complexities involved in what may appear to be a basic concept: What do we mean when we say “race”? Is this concept a biological one rooted in genomic sciences? Is it merely a phenotypic categorization? Is it culturally based? Is it a social construct used by elites to organize societies? The video shows interviews with scientists and ultimately illustrates that racial differences as commonly understood have little biological meaning — We are all pretty much the same under the skin. In fact, there is greater genetic diversity within a racialized group than between groups. Part II (September 25) will cover the roots of race and racism in America, as well as how race is used to naturalize inequality. Part III (October 9th) will examine intersections of race with social institutions, power, wealth, and status.

Visit https://www.racepowerofanillusion.org/events/ for more event information and the recorded videos of the live panel discussions,