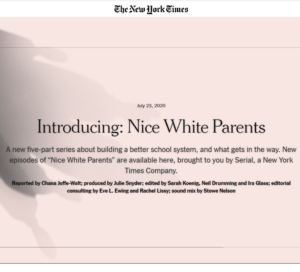 From The New York Times, Nice White Parents looks at the 60-year relationship between white parents and the public school down the block and is a new five-part series about building a better school system, and what gets in the way.

“We know American public schools do not guarantee each child an equal education. Two decades of school reform initiatives have not changed that. But when Chana Joffe-Walt, a reporter, looked at inequality in education, she saw that most reforms focused on who schools were failing: Black and brown kids. But what about who the schools are serving? In this five-part series, she turns her attention to what is arguably the most powerful force in our schools: White parents.”

All episodes, and more information about the series, are available now. The show is also available on your mobile device: Via Apple Podcasts | Via Spotify | Via Google