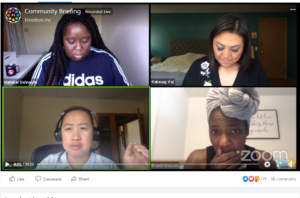 Join Freedom Inc. and Urban Triage for a community briefing on the White Supremacist Terrorist who murdered protesters in Kenosha. #DefundPolice #DefendBlackLife

National media outlets have failed to properly report the shootings as the actions of white supremacist terrorists engaged in intentional acts of violence. These shootings, as well as the presence of white supremacist militias at uprisings for Black lives across the country, are designed to suppress Black people who are rightfully fighting back against generations of murder and exploitation by the state. The reporting of these shootings as chance incidents perpetuates the legal system’s protection of white men who murder Black people and puts us at an increased risk of violence from these supremacists.