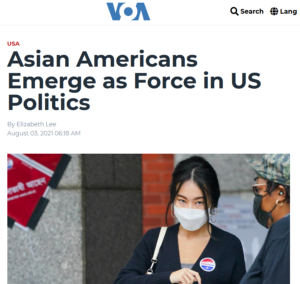 Since the Voting Rights Act of 1965 was signed into law, removing barriers preventing African Americans from voting, the face of the American voter has gradually changed. During the 2020 elections, Asian Americans flexed their political muscle in presidential and congressional races, contributing to a record voter turnout across the nation.

Demographers and other experts say Asian Americans will steadily grow into a dominant force in American politics. “Asian Americans have really come into prominence as a new electoral force to be reckoned with,” said Sara Sadhwani, a senior researcher for AAPI Data.

The turnout of Asian American voters hit a historic high of nearly 60% in 2020, according to the U.S. Census Bureau.  By a margin of 68% to 28%, Asian Americans voted for Democrat Joe Biden over incumbent President Donald Trump, according to an election eve poll organized by the AAPI (Asian American and Pacific Islander) Civic Engagement Fund and 21 other organizations.

“Over the last several election cycles, what we’ve seen is Asian Americans have veered more and more towards the Democratic Party, and certainly that was the case in 2020 as well,” Sadhwani said.

Read the rest of the news article here