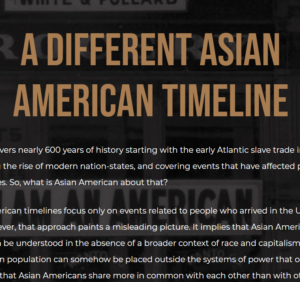 This timeline covers nearly 600 years of history starting with the early Atlantic slave trade in the 15th Century, tracing the rise of modern nation-states, and covering events that have affected people across racial boundaries. So, what is Asian American about that?

Most Asian American timelines focus only on events related to people who arrived in the United States from Asia. However, that approach paints a misleading picture. It implies that Asian American experiences can be understood in the absence of a broader context of race and capitalism, that the history of a given population can somehow be placed outside the systems of power that organize society. It also assumes that Asian Americans share more in common with each other than with other groups of people, yet there is no single Asian or Asian American past, politics, or culture. Most people from ethnic and national subgroups considered to be Asian American don’t call themselves Asian Americans. Many harbor prejudiced notions of one another. This stems from histories of conflict, conquest, and colonization within the vast and ill-defined continent that Europeans labeled Asia many centuries ago. The boundaries of Asian American identity, like the boundaries of Asia itself, are always in flux, constructed by dynamics of power that demand to be studied: imperialism, racial domination, gender oppression, labor exploitation, war, and social movements.

We cannot fully understand Asian American history without asking why Asians arrived in the Americas, and what relationship their arrival had to the global conditions affecting people across racial and national boundaries at the time. For example, why did the British “coolie” trade accelerate after Britain outlawed slavery in 1833? A more traditional Asian American timeline might not make this correlation visible, yet enslaved African people and indentured “coolies” were closely related within British and U.S. systems of racialized labor control in the 19th Century. Viewing Asian migration to the Americas in this context starts to erode the myth of the United States as a benevolent land of immigrants, to reveal instead a nation effectively ruled by oligarchy in which the plights of various kinds of exploited workers and oppressed groups have been inextricably connected.

Many of us learn to think of race as natural categories of human difference based on skin color, culture, or national origin. This timeline invites us to think of race differently, as an instrument of empire. As Asian American scholar James Kyung-Jin Lee has stated, “Race is better described as a verb than a noun, as production rather than destiny.” Race is the verb that animates a centuries-old world economic process, constructing human difference among the many to build power for the few.

No timeline could fully account for six centuries of history, and this one is no exception. Instead it is meant to serve as a resource for critical thinking, a tool for in-depth and nuanced discussions to see Asian Americans and others both as subjects of domination and as agents of history. It is organized by historical time periods marked by major shifts like the U.S. Civil War, the Spanish-American War, World War II, and Reagan-Era neoliberalism. Events are organized by the reasoning, or logics, that have shaped the United States economically, politically, and culturally – the interrelated struggles over land (settler colonialism), labor (slavery), and geopolitical power (empire). It also features sample stories of freedom, a contested idea that has fueled efforts both to lift greater numbers of people out of oppression, and to amass benefits for some people at the expense of others.

“RACE IS BETTER DESCRIBED AS A VERB THAN A NOUN, AS PRODUCTION RATHER THAN DESTINY.” —JAMES KYUNG-JIN LEE

This tool invites us to see both the specificity of group-differentiated oppressions and their relationships to one another within racial capitalism. The importance of studying Asian American history in this way lies in the urgent need to work toward democracy amid rising forms of authoritarianism and nationalism. These dangers are the products of American empire, which has accumulated power and wealth for the few by producing and leveraging divisions among the many. True democracy will depend on our ability to imagine new ways of being that reject racial subjugation and supremacy in favor of “a new society based more on human values,” as the great Grace Lee Boggs put it so well.